Why You Need Lennie

This exciting performer has released nine albums, seven in English and two in French, which have won him a host of awards and nominations from both the JUNO Awards and East Coast Music Awards.

He has toured all over North America and in Europe with his five piece band, as an acoustic trio, or with symphony orchestras. Gallant’s performances are consistently described as “energetic…dynamic…inspirational… A powerhouse of a show! ” – The Chronicle Herald, Halifax

Over 30 artists have recorded his songs including Jimmy Buffett, who recently invited Gallant to perform it onstage with him . He has also toured or shared the stage with a host of well known artists including Celine Dion, Roger Hodgson (Supertramp), Lucinda Williams, and Ry Cooder to name a few.

Lennie often performs for special events and corporate shows to rave reviews and receives calls for return invitations. He can perform in English or French or a combination of the two depending on the circumstances and audience numbers. He will often do a little research on the company or institution involved so as to make the performance especially memorable, appropriate, funny, and often interactive.

He was recently inducted into the Order of Canada where it was said “Gallant has garnered much respect for his songs which celebrate the beauty of lifestyle and landscape with their strong poetry and stirring narratives.”

He has performed on many prestigious stages including Canada Day celebrations in Ottawa, The Maple Leaf Ball in London England and The Lincoln Centre in New York City. He was part of an all star Canadian line-up performing an internationally broadcast concert from New Orleans. He and George Canyon were special guest artists on a trip to Afghanistan to perform for the Canadian troops there. When Halifax celebrated it’s 250th anniversary Lennie was commissioned to write a song for the event, which he then performed accompanied by an amalgamated choir of 2000 voices gathered on a stage erected on the Macdonald Bridge spanning the harbor. He represented the East Coast of Canada at “Canada Day in London” in Trafalgar Square on July 1, 2011 in the largest Canada Day celebration outside Canada’s borders. He performed 6 shows at the Vancouver 2010 Winter Olympic Games, including a performance at BC Place during the medal ceremonies.

As a performer, Gallant’s intense delivery reaches down to the very soul of his audience, moving effortlessly through stirring narratives, comic observations, and hard driving rhythms.

Why You Will Love Lennie

“Lennie was great. A real pro and a pleasure to work with.”

“Lennie was fabulous; a great hit with the audience, even though they were there not for a show but for an industry event. He had them clapping and singing along, and had an enthusiastic line-up for signings afterwards. He was exceptionally professional in his performance and in every way, and a pleasure for this association to host.”

“We are so pleased to have hired Lennie Gallant for the FAS Annual Conference. From the start, Lennie was easy to deal with and took the time to introduce himself and his work prior to the conference. His performance was extremely well received – our audience loved him! His music was timeless, ageless and his great personality enhanced the overall performance. He was a great addition to our conference and would consider hiring him again.”

“We’ve been used to welcoming visitors from Canada’s east coast in recent years. The biggest impression of all, though, could be the one Lennie Gallant makes when word about him reaches beyond the dedicated seekers of transatlantic talent who investigated this Scottish debut.”

“Our northern neighbor has given us some of the best songwriters living today. You can add Lennie Gallant to that list.” 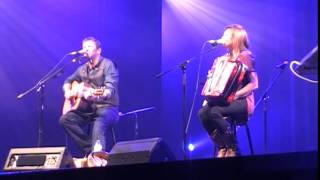