What Robin is Passionate About

Lead Without A Title™: Winning Leadership Strategies to Build a Great Company

Robin Sharma is one of the world’s most trusted leadership experts and a man whose transformational ideas have helped over 5 million employees in 62 countries do their absolute best work. Robin also is the founder of Sharma Leadership International Inc., a global training firm.

Based on Robin’s international bestseller, The Leader Who Had No Title (Simon & Schuster) this highly inspirational yet immensely practical presentation will teach your people:

When Fortune 500 organizations need a speaker with a proven track record of delivering leadership presentations that inspire, engage and deliver real business results, they go to Robin Sharma. His “Lead Without A Title” message has gathered a global following that includes celebrity CEOs, celebrated entrepreneurs and many of the corporate elite as well as workers from every imaginable industry. One of the true superstars on the business speaking circuit, Robin will wow your people and deliver a program that will influence them for a lifetime.

In this high-content and inspiring keynote presentation by internationally-respected leadership expert and #1 bestselling author Robin Sharma, participants will learn the breakthrough strategies that elite performers in many of the world’s most successful organizations use to seize the opportunities that change presents and create extraordinary results in these fast-moving times.

– How to get more done in less time
– The success habits of world-class performers
– The importance of taking personal responsibility for creating excellent results and the need of every employee to see themselves as a leader who can make a difference
– The value of daily and continuous improvement and how complacency breeds failure
– Powerful lessons to help your team become world-class innovators who are constantly doing things better
– How the greatest businesses on the planet build high-performance teams and truly excellent cultures
– Cutting-edge ideas for creating “customer delight”, “wowing” clients and building enduring relationships
– 7 tools that will help your team lead the field and achieve lasting personal excellence
– Big ideas on balancing family with work and creating peak health

Ideal for Public events where a general audience comes from diverse backgrounds and different organizations. This presentation is also excellent for client appreciation events and community gatherings.

In this unforgettable presentation, Robin Sharma shares the most important things he has learned about living a successful and significant life. Drawing from his personal experiences, this session is an intimate – and powerful – look at how human beings can find authentic success and personal fulfillment at work and at home.

Your audience will learn:

Why You Need Robin

Robin is the author of eight #1 international bestsellers including The Greatness Guide (HarperCollins) and one of the world’s top experts on leadership, change management and personal mastery.

He is the Chief Executive Officer of Sharma Leadership International Inc., a widely respected leadership development firm that has helped over 4 million people in 50 countries along with clients such as Nike, FedEx, IBM, GM, Microsoft, Kraft Foods, KPMG and Panasonic and organizations such as NASA and YPO get to their next level of world-class.

Robin is one of the most in-demand speakers in the world, frequently sharing the stage with individuals such as Bill Clinton, Jack Welch, Stephen Covey, Ken Blanchard, Deepak Chopra and Dr. Phil.

A former litigation lawyer, holding 2 law degrees including a Masters of Law, Robin is also a leading executive coach, having worked with billionaires, major CEOs and celebrity entrepreneurs.

As CEO of Robin Sharma Films Inc., Robin has also become a filmmaker. The Monk Who Sold His Ferrari is being made into a major motion picture.

A former lawyer, he quit his job and self-published a book at a Kinko’s copy shop. Robin’s first seminar was attended by 23 people – 21 of which were his family members. His second book, The Monk Who Sold His Ferrari was also originally self-published until former HarperCollins president Ed Carson discovered Robin in a bookstore.

The book, and the series has become one of Canada’s most successful publishing franchises as sales near 250,000 copies sold in Canada alone. Robin’s books are read by CEOs, political leaders, homemakers, movie stars, pop stars and sports celebrities and people from all walks of life.

What’s the Buzz on Robin Sharma: Many Fortune 500 companies have already embraced Leadership Wisdom From The Monk Who Sold His Ferrari.

Corporate transformations have occurred in organizations such as Microsoft, IBM, FedEx, Panasonic, Kraft, General Motors and Panasonic. The book is essentially about creating workplaces where it’s safe to be human again, helping leaders work and live by a high moral code and inspiring individuals to step up to the plate and show leadership at work and in their personal lives.

Why You Will Love Robin

“I can now see the value a talented professional can bring to conference such as ours. I was impressed by the manner in which you were able to customize your work.”

“…you built trust and credibility with the audience.

Your well-crafted message combined with excellent, entertaining delivery has helped us to ignite the passion of leadership within our Senior Management ranks.”

“…you captured the entire audience’s attention and held them spellbound.”

“…your messages were insightful and on target.

Thank you for being such an inspirational and thought provoking keynote speaker. You have set a high standard and raised expectations for our series.” 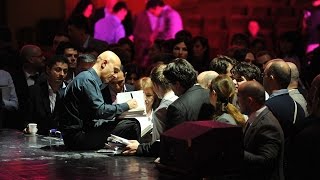 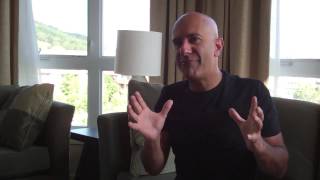