What Paul is Passionate About

It’s a conference closing like no other. All of the key lessons, messages, and highlights of your conference are played back to your delegates in an amazing comic summary. Paul uses his sharp wit, imagination, and talent as a performer to play back your convention with comedy, summary and song.

Imagine the impact of ending your conference with a comic wrap up that reinforces your content and leaves people feeling great about the event. Paul attends your conference and transforms the proceedings into an on-the-spot comic review. The Ultimate Ending is the perfect way to guarantee that you end on a high note.

Paul’s insightful and hilarious spin on events focuses on your business content and your people. They’ll laugh until they hurt, and leave re-energized and remembering the important lessons of your sessions.

Paul is a trained actor and singer and has degrees and diplomas in management, adult education and counselling. Add in 16 years of experience as a speaker and only he can create a closing keynote like this.

Paul’s most requested talk. Humour Habits is an hilarious keynote which teaches wellness, celebrates accomplishments, and provides seven simple tactics for your people to use back at the office and in their personal lives.

Motivational and funny. Participants learn strategies to focus on their business goals, stay balanced in a sometimes unbalanced world, and adapt to changes within your organization. It’s a high-energy presentation that reinforces your organization’s core values while promoting personal and professional growth.

Seven Humour Habits is ideal for people who work in stressful environments. It’s an excellent way to say ‘thank you’ to your staff and show them that they are important to your organization. Your employees will leave with a greater sense of community and wellbeing, perfect ingredients for higher productivity and greater commitment to the success of the company. Paul works closely with you to understand your needs and personalize the keynote to reflect your uniqueness and goals.

Paul is an award-winning speaker with a background in career counselling, adult education, and human resources. He’s also an actor and singer. This odd mixture leads to captivating keynotes that educate, entertain and inspire.

Everybody Stay Calm - How to Thrive in Stressful Times

— Is your Workplace a Stressplace?
— Have resources been stretched to new levels?
— Is everyone working harder than ever before in a hectic environment?

It’s time to step back, laugh, and learn techniques to stay calm when things get crazy. Paul will help relieve your business stress by teaching your group how to do more than just cope. They’ll learn to thrive on stress.

Everybody Stay Calm is also a lot of fun. It’s low stress learning and a great break from the usual serious sessions of a conference. It’s a sure way to show your team that you value them.

Climb Your Mountain - The unEverest Keynote

Follow Paul to the top of Mt Fuji, the perfect mountain to climb, because you can climb it too. It’s not Everest. it’s Mt Fuji, the mountain that 400,000 people – including grandparents and children – climb every year.

Mt Fuji is the setting to learn about how to achieve your goals. The mountain forced Paul to face obstacles, stay focussed and laugh at challenges. It also gave him a great opportunity to learn to enjoy the view on the way to the summit. And if he can do it, you can too.

Presented with breath-taking photographs and compelling video, this keynote is an awesome adventure that will inspire you to find opportunities, follow your dreams, and be your best.

We can’t all climb Mt Everest, or Mt Fuji, but we can scale the mountains we need to in our own lives.

Change at work is inevitable. Laughing at it is not, but it’s a great way to manage through difficult times. This talk teaches how to face the inevitable and turn your workplace back into one that’s productive and fun.

Your group will learn how to deal with stress, change, and conflicting demands and not let the negatives get in the way of work. Create a resilient team, one that’s aware of individual change styles and able to move forward in any environment.

They’ll also laugh throughout the session and won’t even know they’re learning.

Paul Huschilt is a trained actor and singer, has experience as a corporate employee, and holds degrees and diplomas in management, counselling, and adult education. This unusual background ensures he can engage any audience and make them laugh.

Why You Need Paul

A Professional Speaker and an Actor and a Satirizer rolled into an unusual ball of corporate messaging and humour. With Paul you can expect anything and get everything you want for your conference. Hilariously funny, smart, motivating, inspiring and memorable, Paul creates conference summaries and keynotes tailored exactly to the needs of your audience.

Described by many as indescribable, he’s one of the most unique voices in the speaking industry. Paul’s talks are an adventure in content and laughter and song. He delivers his lessons and your messages with energy, passion, and fun.

Now imagine ending your conference with a hilarious on-the-spot musical spoof about what just happened. Paul Huschilt, award winning speaker and storyteller attends your conference, takes tons of notes and converts it into a wickedly funny and respectfully irreverent satire that is virtually laugh-a-line and totally focused on you.

Meeting planners and clients call on award winning speaker and storyteller Paul Huschilt, the delegate-in-disguise who retells everything. Your conference is an astounding story waiting to make your people laugh as they remember what they did and celebrate what they do. Paul Huschilt provides The Ultimate Ending™.

Paul has been to grade 1 twice, but he has never been to grade 2. (At the age of 7, Paul moved to Switzerland (with his parents) where he repeated grade 1. The Swiss were so clever that back in Canada, he skipped grade 2.)

Although he believes in life-long learning Paul is no longer in grade school. If he were, he would be in grade 37.

Paul’s speaking and seminar work has taken him across the United States and Canada, as well as to the Netherlands, France, and Japan.

Paul Huschilt is an award winning speaker and storyteller.

The Canadian Association of Professional Speakers has asked Paul to present his closing conference weaving summary for 3 national conventions in a row.

Paul presents in French, English and Japanese. He plans to learn a new language every 5 years until he reaches grade 57.

Paul holds a Master of Arts Management Degree, a Bachelor of Fine Arts degree, a Diploma in Career Counselling, and a Certificate in Adult Education – all of which he earned himself! (These he earned at Carnegie Mellon University, The University of Windsor, George Brown College, and St. Francis Xavier University respectively.)

At 24, Paul drove Debbie Reynolds to dinner when he was the Assistant Company Manager for the Pittsburgh Civic Light Opera Company.

Since becoming a professional member of the Canadian Association of Professional Speakers, Paul has not missed a convention.

Why You Will Love Paul

“Paul deftly summarized key points of the conference with humour and intelligence. It is not a template presentation, and I have yet to see anything like it. If you are looking for a fresh, intelligent and memorable way to review your conference material and messages, I strongly encourage you to talk to Paul.”

“You were the perfect ending for the OASIS convention. You had the participants laughing till it hurt as they focused on their own wellness, and celebrated the difference they make in others’ lives. They left re-energized, re-focused and re-inspired, just as we had hoped.”

“We really had no idea what we were in for when we booked Paul Huschilt from half way across the world to close our national convention. What eventuated from his presence at our three day event was an extremely funny and very unique end to the convention.”

“People were amazed at your ability to reinforce messages, in a comical way, including from content delivered only an hour before. The audience had tears in their eyes, they were laughing so hard. It was perfect.” 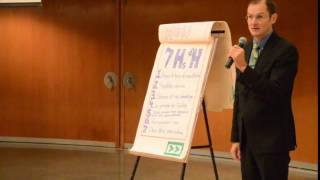