What Kelly is Passionate About

Self Esteem for Success

Many times Kelly was given a bottle of something that was promised to make her scars disappear and make her beautiful.

She knew no matter what it wouldn’t work, she knew that her self esteem and beauty had to come from her heart and soul not from the faulty magic.

You will learn how this burn survivor didn’t feel the need to cover up her scars in order to succeed in life.
In this keynote you will learn:

Audiences:
This interactive keynote is great for teenagers, women’s groups, corporations, charities/associations and in the workplace. There is also an action guide available for optional all-day workshops.

From Near -Death to Success

In today’s world, it’s so easy to quit and not even try to succeed, or we’re faced with an obstacle and instead of trying to see it as an opportunity to change directions and move forward, people find it easier to just give up and say they it didn’t work.

This keynote goes deep into Kelly’s life story about how she had her near-death experience when she was only two-years-old and was given her first opportunity to quit life.

She also talks about options she was given in her personal and business lives and how if she would have quit the million times she could have, she never would have become the success she is today.

She shows you how quitting just isn’t an option and if the two-year-old didn’t quit, neither should you.

Audiences:
This interactive keynote is great for women’s groups, men’s groups, charities/associations and in the corporate workplace.

You're More Than Enough

Have you ever said any of these statements to yourself: I’m not successful enough, I’m not smart enough or I’m not good enough? Likely you have, in Kelly’s presentation she will show you that you don’t have to be a perfect person in order to be more than enough. She went from the ugly scar-faced girl to being honoured by the Queen with a medal and more recently, the producers of the Dr Oz show have contacted her about being an expert on their show.

You will learn:
– Your value is not determined by how much money you make or don’t make
– Your imperfect body makes you perfect enough
– Your head drama can harm you or empower you
– And how to change your thoughts so you can feel “more than enough”

No Risk No Rewards

Why are most of us so afraid to take risks in your personal or business life? Do you often look at other people’s success and think you can’t have the same rewards?

Kelly has a very unique viewpoint on risks because as a burn survivor at the age of two, just leaving the house every day was a huge risk. Would she be teased, or picked on or ridiculed in some way? How would she face the risks and rise above them and become a confident child and woman?

In this inspiring keynote Kelly shares how she made the choice to take the risks because her desire for the rewards outweighed the risks. She will share how she takes risks and how you can too.

In this keynote you will learn:
– How to train your brain to think in a different way so that you are more willing to take the risks you want to take
– How to ‘just walk out the door’ no matter what you think others might say, think or do to you
– How to decide what you really want so that the rewards are far bigger than any of the risks
– Create a ‘big reward’ plan with ways to follow through on the risks

Why You Need Kelly

Kelly Falardeau is a burn survivor since the age of two-years-old on 75% of her body and constantly struggled with her self-worth and confidence. She found a way to go from near-death to success; from the ugly scar-faced girl to the Top 10 Most Powerful and Influential Speaker, Fierce Woman of the Year, three times a Best-Selling Author, recipient of the Queen Elizabeth II Diamond Jubilee Medal and most recently a YWCA Woman of Distinction. You have to ask yourself how? How did a burn survivor who constantly struggled with rejection, staring and teasing burst through all the negativity in her life to succeed? You have to hear her speak or read her books to learn the stories of how she did it.

Friends, family and those who have worked with Kelly all say that Kelly doesn’t let fear stop her – when she wants to achieve something, she just does.  They also say that the fact that Kelly is a burn survivor since she was two-years-old is so motivating because she does not let circumstances dictate her success.

At 21, she was nominated and won the position of President of the Alberta Burn Rehabilitation Society. As a kid, she also won the 4-H Most Improved Member award plus various public speaking awards and even the fastest senior typist award in high school.

Kelly has been featured on various media in Canada, United States, Taiwan, Mexico and Africa such as Global TV Edmonton and Calgary, CTS TV, CTV TV, Breakfast TV, Access TV, CBC, A-Channel, CFRN and KenyaTV. She has also appeared as a guest on a various radio shows too. Articles have been written about her in the Edmonton Woman Magazine, Edmonton Examiner, Edmonton Journal, Edmonton Sun, Pioneer Balloons Balloon Magazine and she also won the MOM Executive Officer award from the Mom Magazine.

Kelly was chosen amongst thousands to present her business to the Dragons for the Dragons’ Den television series plus won the “Fierce Woman of the Year” award.

Kelly was selected out of 1500 women to compete in the Every Woman model search competition, sponsored by Fashion Has No Borders and Ben Barry Agency. She faced her fear of being judged by her appearance and walked the runway and won the Peoples’ Choice award.

Kelly has been involved in various burn camps and has spoken to a variety of groups including teenagers, adults, people with disabilities, Aboriginal groups and business people.

She is a sought-after international speaker because of her ability to engage others. She is able to move audience’s emotions and make them see how a bad situation can become a great one. She will have you crying, laughing and dancing in your chairs as she shares her many stories about risk, rejection, resilience’ and overcoming adversity.

Not only is Kelly a creator and speaker, she is also a best-selling author and wrote three books called No Risks No Rewards, Self Esteem Doesn’t Come in a Bottle and 1000 Tips for Teenagers. Two of which are best-sellers.

Why You Will Love Kelly

“Kelly’s ability to have the audience relate to her is truly refreshing. Listening to her talk, you relate to her very quickly which has you look at the struggles in your own life. She gives you the incite needed to overcome life’s most difficult struggles. I recommend everyone hear her speak as her story and message will change your life. Thank you Kelly!”

“I just wanted to say thank you very much for the most wonderful book that I received on Saturday – personally signed by you! You’ve been a great inspiration to me, as I move forward from a time of much uncertainty in my life. I’m university educated, and have read many books, but never one quite as positive as yours (and I spend all of my help in the self-help section trying to “fix” myself, lol). But maybe I’m really okay just the way I am. And MAYBE I could be even better if I put my mind to it! Thanks so much for being such a big part of a wonderful day in all our lives – there was much “buzz” about you today at the Scarborough Women’s Centre in Toronto!”

“I just had to take a minute to let you know that it was a complete honor to have met such a powerful and inspiring person such as yourself. The world needs more people like you and the fact that you talk to people about self esteem issues is an amazing thing. You truly are an influence to everyone around you.”

“You are so confident and have so much inner strength and so much humor, it comes out in your presentations! Thanks so much for sharing – you’re amazing.”

“I have to say that I am very impressed. You are a great, warm, engaging speaker with a terrific and uplifting message. You are sensitive and witty and the love that you have for others shines through.” 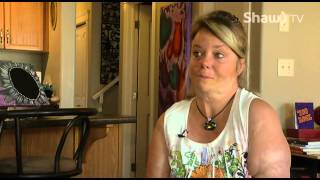 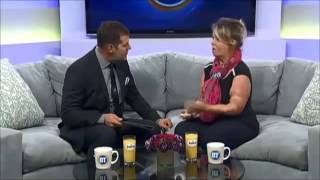