What Gayle & Judy is Passionate About

Get the top tips for face-to-face networking & social networking.

This is the best training for today’s networking! LinkedIn, Twitter, Facebook, Instagram, other social networks, apps, chat bots and email are ways that people connect these days and it’s a world that changes rapidly. This session helps audiences learn how to use these digital tools as a powerful alloy, but not to the exclusion of face-to-face connecting. You can’t do one without the other. Face-To-Face & The Digital World™ is networking training for a time-crunched world that still requires people to build high-trust relationships and grow their networks.

People come to conferences with anxiety about walking into the opening reception solo, talking to a stranger at the coffee break, and dreading the awkward silence in elevator rides. You can change all that with Leap Start!™. This opening keynote gives everyone the skills and the confidence to network and connect more effectively at your conference. This unique program will change the networking dynamic of your conference.

Using a 7-step process, N.E.T.W.O.R.K., participants are given the essential skills to network better with colleagues, customers, clients and strangers. It is based on the “world’s best definition” of networking, Positive Networking®.  Participants learn practical and tactical tips to become better networkers, even introverts This program provides sure-fire cures for networking nervosus™ and the skills to ‘work the pond’, engage in small talk and follow up effectively. Attendees come away with personal networking plans and easy wins that they can use immediately.

This is a great program for internal women’s networks and women’s conferences. Networking is a key leadership competency for women yet research shows that women will often “check off” all the work on their to-do list before they make time to network. The Engaged Woman Leader™ teaches the skills of networking with a woman’s focus, and helps women see the value in getting out from behind their desks—for their career and life. Even networking-savvy women describe this program as an essential refresher in networking and collaboration skills.

Build better, happier, more effective teams by giving them the essential tools of communication. Participants learn how to keep a conversation from going off track, be more aware of mental models and unconscious biases and to ask questions more effectively. This is a hands-on, exercise-based, team-building experience that will help your team develop heightened rapport and trust with their colleagues, clients and customers.

Gayle and Judy are unique masters of ceremonies for your conference. Not only are they excellent at the podium, they keep the networking going throughout your conference with networking tips, exercises, stories and audience interaction. They are expert facilitators for roundtables and panels. “Gayle Hallgren-Rezac and Judy Thomson have a special way of connecting with their audiences Not only that, but they get their audiences connecting with one and other!”

Why You Need Gayle & Judy

Gayle Hallgren-Rezac and Judy Thomson are two of Canada’s top networking experts and co-authors of the best-selling book, “Work The Pond! Use the Power of Positive Networking to Leap Forward in Work and Life”. They teach the ‘world’s best definition’ of networking, Positive Networking®. With over a decade of experience giving top-rated presentations, they offer a fresh approach as co-presenters: “I love the interaction between the two of you.” “You finish each other’s sentences, it’s seamless.”

Gayle Hallgren-Rezac is entrepreneur (founder, Cookies by George) and a recipient of the YWCA Woman of Distinction award. Gayle has spent over two decades observing and writing on networking around the world. She is a member of the elite Davos Circle, having attended the World Economic Forum in Davos, Switzerland over eleven times. This is the ultimate networking event that brings together world leaders, celebrities and politicians to discuss global issues. She is also an expert on the “art of conversation”.  Gayle and Judy have given hundreds of presentations to corporations, associations, governments, and have worked extensively with university students from undergrads to MBAs and PhDs. They have had the privilege of presenting on the same stage as Dr. Oz, Joy Behar, and others through the Power Within and Power of Women series

Judy Thomson is a chartered professional accountant (CPA, CA) who has held executive positions in human resources and administration with global companies in Canada and Asia. She was also part of the start-up management team of the world-famous Rocky Mountaineer Railtours. Judy is an honoured alumni of The Greater Vancouver Board of Trade’s Women’s Leadership Circle® advisory council (after serving six years as vice-chair), a past director of the Women’s Enterprise Centre, and has ten years of corporate director experience in the public and not-for-profit sectors. Judy and Gayle’s list of corporate clients include EY Canada, RBC Financial Group, RBC Dominion Securities, Procter & Gamble, Scotiabank, TD Canada Trust, TELUS and many more.

Why You Will Love Gayle & Judy

“You reminded me that networking was not about remembering names but about listening and looking for opportunities to help thus inspiring growth personally as well as professionally. Thanks for helping me grow and become more confident in my networking skills!”

“I learned so much, in fact I went to a function tonight and found myself stepping outside of my shell and introducing myself to strangers.”

“The conference “is over… and guess what, no wall flowers… no Klingons 😉 And funnily enough no odd elevator rides anymore. So I have to say, job well done!”

“You do a wonderful job of taking a traditional subject and giving it a fresh, informative perspective, with a very entertaining approach. I quickly flipped through the conference feedback forms this morning and it’s clear that you had a tremendous impact on our delegates!” 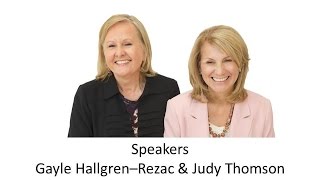 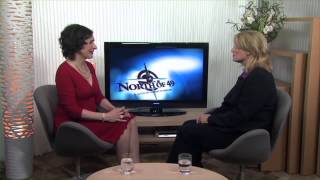