Why You Need Roman

Roman Danylo is a stand-up comic, improviser, actor and writer from Western Canada. Roman’s unique corporate show combines these skills in a fast-paced and hilarious evening perfect for any occasion. Before every event, Roman gathers information from the organizers and customizes a show for their audience. Roman’s show is highly interactive and often incorporates individuals from the crowd into the performance.

Roman was born and raised in Calgary, Alberta, Canada. At his birth his mother screamed “Yeeha!” Which was particularly strange because she was a Ukrainian German immigrant with a thick old country accent. In school Roman was excellent at math but really crappy at english. According to his guidance counselor Roman should not be an actor but should consider a job in electronics. He is the youngest of four and his older brother use to pound the crap out of him for no reason damn it! When Roman was very young he was heard to say, “When I grow up I want to be a giant and step on people!” In his teen years he played a lot of sports and worked out that aggression. In his later days of high school Roman was found to be very good at drama because he could easily be loud and annoying.

The rise of The Roman Empire began in Calgary back in the late 1980’s where Roman worked for several local comedy clubs, The Loose Moose Theater, Theater Calgary and various CBC Radio Dramas. With a youthful optimism and naiveté The Roman Empire invaded Vancouver in 1992 and was soon destroyed by a band of warrior Mongols. After rebuilding it’s army The Empire was victorious in the following battles…

Roman is one of only a handful of comedians to have performed in the prestigious HBO Comedy Festival in Aspen and Montreal’s Just for Laughs Festival in the same year. In Hollywood he starred in the UPN Series ‘Off Limits’, and has been featured on NBC’s ‘Late Friday’. He has appeared in the feature Fflms, ‘Duets’ with Gwenyth Paltrow, and ‘Happy Birthday’ with John Goodmanm. Roman was the host of a talk show pilot produced by fellow Canadian David Steinberg, and has acted in a stage sketch review show with Martin Short. Roman has appeared as a dramatic actor in television shows like ‘Jeremiah’, ‘Outer limits’ and ‘Sliders’.

Back home Roman has appeared or starred in several Canadian series including CBC’s ‘The Debaters’, ‘The Winnipeg and Halifax Comedy Festivals’, ‘Comics’, ‘These Arms of Mine’, ‘Made in Canada’, CTV’s ‘Comedy Now’, ‘Corner Gas’, ‘The Holmes Show’, TCN’s ‘Slightly Bent’, ‘Just For Laughs Improv Championships’ and many more. Roman starred for five seasons in his own sketch comedy series on CTV and Spike TV called ‘Comedy Inc.’ In 2004 Roman won a Leo Award for his performance in CBC’s ‘Western Alienation Comedy Hour’ and has twice been nominated for a Gemini Award for performance in ‘Comedy Inc.’   Roman enjoys, water sports, raisins and some humans.

Roman is a headlining stand-up comedian, a top Canadian improviser, a TV and film actor, and a traditional theater actor trained at a university and everything. Roman lives in Vancouver and commutes to LA and Toronto for work. Roman is part of an extensive carpool program.

Why You Will Love Roman

“Roman was wonderful. He tailored his routine so nicely and was specific to the newspaper industry. The audience roared with laughter. He is worth every penny. And of course, having had such a hit for an entertainment this year, I worry about next year”

“Roman’s ability to keep a crowd laughing with the use of improvisational comedy was obvious. With some information about our company and our employees he was able to put together a clean , humorous program that entertained all and offended none.”

“Roman’s Improvisation skills were second to none and the extent to which he involved and captured the attention of the audience was fabulous. It was certainly apparent that all those present had a terrific time and those who unwittingly became part of his routines were made to feel at ease.”

“Roman Danylo was outstanding. His skills in getting the crowd involved and quick wit is second to none.”

“I just wanted to let you know that the conference was a big success and that Roman was outstanding! The way he incorporated the information we had given him on the company and various people within the company into the evening and his improv routines was nothing short of amazing. The feedback from the gala was that it was without a doubt, the best we have ever done and Roman was a big part of that.” 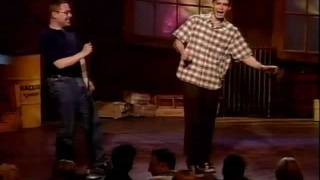