Why You Need James Mullinger

James Mullinger was one of the UK’s top comedians and the Comedy Editor for GQ magazine when he moved to Canada in 2014. Since his arrival, he has taken the country by storm. He has sold out shows across the country, made appearances on CBC’s The Debaters, movies, Television shows, festivals, award shows and stand up specials…he’s done it all. In March 2020, James was in the middle of a global tour when the pandemic forced him off the road. He has since become one of the most in-demand virtual comedians on the circuit, performing virtually for companies around the world.

An award-winning writer, comedian and filmmaker, he spent 15 years in a senior position at British GQ, interviewing everyone from Jerry Seinfeld and Paul Rudd to Rachel Weisz and Scarlett Johansson and launching the magazine’s digital division. In April 2016 and 2018, James sold out Harbour Station Arena in New Brunswick with his uniquely hilarious stand-up show, outselling Jerry Seinfeld, Jeff Dunham and Guns N’ Roses when they played the same venue. An award-winning CBC documentary about the show titled City On Fire was aired nationally to rave reviews.

His latest stand-up special, Almost Canadian, shot straight to #1 on the iTunes charts and was nominated for a Canadian Comedy Award for Best Taped Live Performance. It is available to watch internationally on Amazon Prime Video. The film that he co-wrote about his early years in comedy was released in cinemas across the UK and premiered at the Just for Laughs festival in Montreal in 2016. It stars actors from Downton Abbey, Twilight and Game of Thrones.

James has also raised more than half a million dollars for charities internationally. He is a much sought-after, corporate clean comedian and keynote speaker internationally on the subjects of marketing, media and uplifting positivity celebrating life, work and play in Canada.

He is also a much sought after corporate clean comedian and keynote speaker on the subjects of marketing, media and uplifting positivity celebrating where you live and work.

Why You Will Love James Mullinger

“James performed at our Annual General Meeting and Conference before a crowd of 230 people. James did a fantastic job of keeping everyone in the room entertained through his story telling and his jokes. James is a great comedian and very easy to work with. I would recommend James to anyone.”

“James was extremely well received. It couldn’t have gone any better. His comedy was a huge success, we didn’t’ stop laughing the whole time.  He was very accommodating to our schedule and a pleasure to deal with.  Thank you to you and James for all your efforts in making our conference a success.  I look forward to working with him in the future.”

“James has a way of connecting with his audience in a way that us humble, hilarious and motivating all at the same time. He inspired us to continue to connect with our students and be proud of where we live.”

“The moment this veteran British comic bounds onto the stage, you’re in for an amazing hour of solo comedy. James is Britain’s greatest gift to Canadian comedy.”

“It was a wonderful evening and thank you so much for adding such a great segment! The staff are still talking about it! Some of the comments I’ve been hearing: “I haven’t laughed so hard in a long time!” and  “My eyes were watering the entire time!”  It was a pleasure to have you here and thank you for being so interactive with the staff as well.

“With the pandemic limiting our options for Team Building Events, James Mullinger’s Video Conference Show was a god-send. Feedback from my colleagues about the idea and the show itself were both excellent and my family and I all agreed the show was incredible. Despite being thousands of kilometres away from James and attendees gathered from Whitehorse to Tampa Bay, it felt like a very personal experience thanks to James’ unbelievable ability to interact with viewers on a personal level during the show.”

“I’ve seen James Mullinger in live shows, on DVD, and now on Zoom in my home! He never disappoints! The fact that he has adapted to this new reality with Zoom shows really impresses me. It can’t be easy performing from your house every night to an audience on mute, but he does it!”

“Mr. Mullinger’s talent as an award-winning comedian is common knowledge, BUT an unexpected bonus was his unique ability to keep our team’s blood pressure in check.  Any event organizer understands the ongoing concerns about cancellations, late arrivals, etc., when booking entertainment.  James kept our minds at ease through ongoing communications every step of the way.  His attentiveness in ensuring the content of his act was in line with our audience was greatly appreciated and a room full of gut-busting laughter during his performance solidified our belief that he was the perfect choice for our event.  If you are looking to guarantee your event is an outstanding success, I strongly suggest you book James Mullinger as your entertainment.”

“Compulsive viewing. A very funny man with a big future ahead of him.”

“James’ performance was energetic, hilarious, and exactly what we needed. Everyone loved him. He was such a delight to work with from my perspective as a meeting planner. He took time to get to know our organization before the event and socialized with people after the event.” 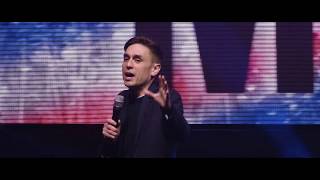 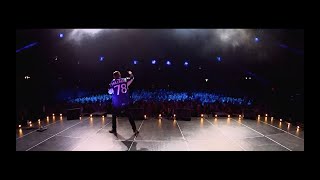 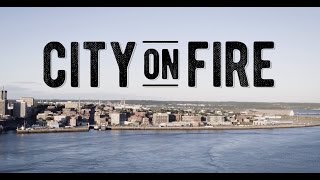 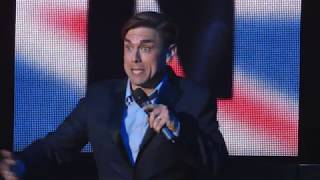