Why You Need Dave

In addition to his own half hour “Comedy Now” special on CTV and his 2 Gala performances at the prestigious Just for Laughs Festival in Montreal, Dave has taped multiple appearances for both the Halifax and Winnipeg Comedy Festivals on CBC. Dave has many acting credits to his name including having starred in the Showcase comedy series “Almost Heroes”. Dave is currently a regular on CBC’s smash hit The Debaters  and a contributing writer on the CBC series “Still Standing”.

He has also appeared on the hit TV series “Billable Hours,” “Jeff Ltd.” and “The Jon Dore Show.”

Why You Will Love Dave

“On behalf of the firm I want to say a BIG thank you for your contributions to the success of our tournament yesterday! DAVE WAS A HUGE HIT!!!!! Everybody is talking about him and I have been getting fantastic feedback! My interaction with him was fantastic as well. (Along with making me laugh a lot) he was very professional. As an emcee he really kept our evening moving and brought a lot of laughs too. All of the partners here were extremely impressed! The feedback has been incredible and he definitely made the 25th anniversary memorable.”

“I recently witnessed the Hemstad experience and was extremely satisfied. As a veteran planner I have never worked with a comedian who is more ready to give it his all. Dave Hemstad helps the audience see themselves in him. He weaves a story that includes physical comedy and impeccable timing. Plus, he understands the difference between a club audience and a conference audience. Do yourself a favour and hire him!”

“We would like to take this moment to thank you for participating in the 9th annual HubCap Comedy Festival; your professionalism and talent were key to our success. Positive feedback from throughout the community confirms that a great time was had by all and that a strong appetite for comedy is alive and well.”

“Just a short note to tell you how much I took notice of you during your performance on “The Debaters” last week. I oftentimes cringe in embarrassment for many of the comics, forced as they are, to go toe-to-toe against each other before a live audience. I don’t know how much advance time you have to create your rant, but the impression I have is that you are hit with it on-the-spot. Regardless, your diatribe on the merits of pie versus cake was nothing short of brilliant. You had me not only laughing out loud in my car, but also marvelling at the depth and clarity of your thought process. I muttered to myself, ‘this guy is the real deal.’ I wish you well in your future, which I truly believe will be filled with much success.”

“Thanks for being an excellent host at our Gala on Saturday night. You were a huge hit!”

“It was great meeting you at our golf tournament. It was fun and not only are you a funny guy but also an amazing golfer. Thanks again for entertaining us yesterday at the PIPSC Open – the tournament was a huge success (we donated $35,000 to the Child Amputee Program of the War Amps) and you were an important part of it! Best wishes to you in your career.”

“If you see only one comedian in your lifetime, see Dave Hemstad.” 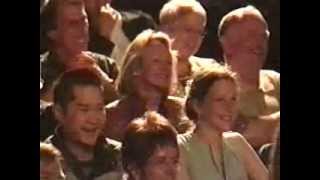 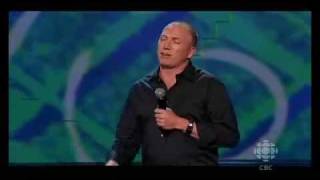