Why You Need Chrissy

As a Canadian fiddler with a firm foundation in the traditional music of Cape Breton and the irrepressible curiosity of an artist driven to create and discover, Chrissy Crowley is now bringing her music worldwide, performing throughout Canada, the United States, as well as Ireland, Scotland, Cuba, and the Dominican Republic, captivating audiences with a talent that belies her youth. Chrissy’s new release, the second recording for the 20-year-old artist, is aptly named “The Departure”.

Her music is in a new direction; a path of fearless innovation which has earned the fiddler three consecutive Canadian Folk Music Award nominations and numerous East Coast Music Association and Music Nova Scotia nominations and showcases. Chrissy has been described as “…rapidly gaining a fearsome reputation among the cognoscenti of Celtic fiddling.

Her playing is fiery and has a distinctly mischievous personality” (Tim Readman, Penguin Eggs Magazine).”

Her first recording, released in 2007 when she was 17, heralded the emergence of a fascinating new talent. A Sonicbids “Artists Spotlight” honour and various MNS and ECMA showcases including the 2008 “Rising Star” showcase, were acknowledgement of her great potential as was her selection as the CBC Galaxie’s Celtic Artist of the Month (May 2009).

Her highly anticipated second album, released in 2010, did not disappoint. Many fans expected a recording of the traditional tunes of her repertoire, and were pleasantly surprised to discover that Chrissy had recorded a mixture of new and old. Chrissy’s original compositions and her experimentation with various instruments and contemporary arrangements acoustically expressed her irrepressible free spirit.

Now living in Halifax, Chrissy is originally from the beautiful Margaree area of Nova Scotia, Canada, a place known for its cherished musical culture. The music of the ceilidh resonates in the majestic mountains and peaceful valleys incorporating not only the tunes of the Scottish Gaels but also those of the area’s Irish and French-Acadians. Chrissy has been inspired by the traditions of artists who have gone before. She has embraced the music of her celtic roots and made it her own.

Chrissy’s passion for the music of her Gaelic ancestors is born of destiny. She is the granddaughter of fiddlers Bill Crowley and Archie Neil Chisholm and her large extended family has always greatly valued the traditions of their Scottish forebears and their Newfoundland/Irish ancestors. Paralleling the efforts of her late grandfather Archie Neil, a writer and broadcaster revered throughout the island as a life long proponent of the Cape Breton musical culture, Chrissy has involved herself with the promotion of the folk tradition as a freelance writer. Her articles about her Celtic heritage and musical journey have been published in Celtic Heritage Magazine, Fiddler Magazine and Celtic Life Magazine.

Chrissy’s ongoing endeavors celebrating the music and culture of Cape Breton was acknowledged by the organization “Youth in Motion” in 2008 who presented Chrissy with a Canadian “Top 20 under 20” award. Recently, Chrissy’s curiosity regarding the traditional music considered Celtic has lead her to the Caribbean. . After a visit in 2009 to Havana, Cuba, where she met Cuban musicians who performed the Galician and Asturian music of their ancestors she became a founder of the Canadian-Cuban Celtic Society. The Society helped organize the inaugural CeltFest Cuba, a festival that celebrates the music and dance originally from the Celtic Nations of Europe, which have migrated to the New World.

Why You Will Love Chrissy

”Rave reviews have been received from various media outlets for Chrissy’s outstanding fiddle playing and she is definitely a star in the making.”

”This self-titled CD is a shining example of the heart and backbone of the East Coast tradition.”

“….rapidly gaining a fearsome reputation among the cognoscenti of Celtic fiddling. Her playing is fiery and has a distinctly mischievous personality.” 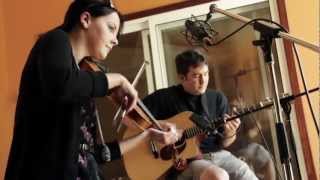